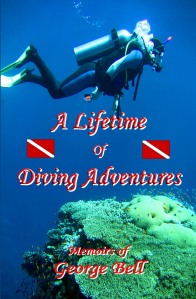 A Lifetime of Diving Adventures: New Book of 100 Short Stories Invites Readers Under the Sea for Real-Life Diving Escapades

Written from decades of diving by George Bell, ‘A Lifetime of Diving Adventures’ takes readers into the dark depths of the oceans to hunt for treasure, breaking world records (catching abalone and crayfish), coming face-to-face with the sea’s most hair-raising creatures and even escaping death along the way. The author has undoubtedly lived an exciting and varied life, one that anyone around the world can now glimpse into. Don the wetsuit!

United Kingdom – For millions, the working week involves sitting cooped in an office cubicle, watching the clock like a hawk and waiting for 5pm to roll around. But George Bell didn’t once look at the clock; who would when they are spending their career getting paid to dive off some of the world’s most beautiful coastlines?

ully aware that his life has bucked many trends, Bell has now put pen to paper to write a memoir that brings over one hundred of his stories together in a single volume. ‘A Lifetime of Diving Adventures’ goes deep into the big blue; a career from which Bell was lucky to resurface alive.

George Bell spent a lifetime diving under the seas, much of which was off the wild coasts of South Africa.

During this time he hunted for historic shipwrecks where he discovered large amounts of gold and silver and was involved in many exciting rescues.

His adventures are legendary and include:

Being chased by a killer whale.

Being attacked by a giant octopus.

Fishing for strange and valuable creatures and breaking world records while doing it.

Not to mention locating huge hauls of copper worth millions and salvaging tankers, one full of crude oil.

Rescuing dozens of people from drowning in many rescues.

As you can imagine, such dangerous activity doesn’t come without some frightening near misses and exciting rescues.

Nevertheless, having done all these things, George Bell is still alive to tell the tale and his book vividly recounts his life underwater in over 100 short stories.

For anyone interested in what goes on under our seas and oceans and the dangers which abound, this book is a must.

“I’ve spent most of my working life recounting my stories to people, with many of them suggesting that I commit my tales to a book. Looking back on it, and considering I was lucky to retire unscathed, I felt it would be exciting to share my stories with the world,” explains Bell, who has retired to Spain. “I’ve dived in the Indian and Atlantic Oceans, all across the coastlines of South Africa and in numerous other countries around the world. Every day brought new adventure with it.”

Continuing, “I’ve worked solidly to make each story as vivid as possible so that readers are not just hearing my stories, but diving alongside me to experience them. I want them to smell the salt of the sea, experience that feeling when you first roll out of the boat and also that victorious, indestructible rush you get when hitting dry land after a day of danger and working close to death. It will brighten any inner-city commute or lunch hour!”

‘A Lifetime of Diving Adventures’, from ShieldCrest, is available now:

Ebook Available on Kindle and Kobo

Now living in Spain and after a lifetime of diving experiences, the author thought his exciting and interesting life might be of interest to others.