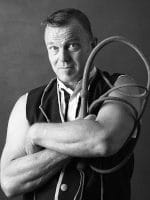 After leaving school, Brett worked as a hod carrier and with a sore back and some money in his pocket started a journey that saw him hitch-hike around the world.

He started making documentary films and worked for the BBC before starting a career as a street artist that led to mime school and then National Circus School in France.

He started Swamp Circus in 1985 with a collective of dancers, filmmakers and ecologists that has now performed in big tops, theatres and outdoor arenas in over 30 countries.

Brett’s life has included living (unwillingly) in a top security prison, a double-decker bus in France, television appearances, building an art centre, starting a fruit farm, and enjoying a great family life in Cornwall where he lives now with his wife and two daughters. 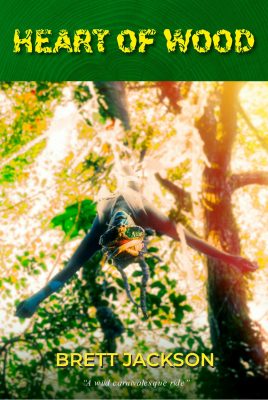 Welcome to a dark future metropolis, where ancient wood is valued like gold and fresh air is sold as the ultimate fix.  A future of tyrannical oligarchy, media overlords and mad gangs.

After fleeing north from the war in South Sudan, Alek and her brother finally find refuge in one of the last forests.

Their world changes as something crashes from the skies into the trees. An alien force bringing a positivity that threatens the oligarchy with a fertile hope.