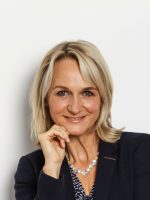 Verena Flocke grew up in a small town in North Rhine-Westphalia in Germany. She studied English and Theology at the University of Cologne and Bonn going on to become a teacher in a secondary school.

Verena has always loved to tell stories, a passion she had inherited from her mum, who was a great storyteller herself. In recent years, Verena pursued her writing by taking part in a local writing workshop, writing mainly short stories and poetry.

Her interest in the English language brought her to Kent, where she fell in love with Deal and its surroundings. Intrigued by the tales of the Goodwin Sands, she started to investigate them.

When asked by a friend who worked for a schoolbook publisher in Italy if she was interested in writing a story in English for his Italian students, she was thrilled.

Once, driving home from England with a friend, she had a puncture in Belgium. Waiting to be rescued, two friends used their time rescue to develop the story -Alex and Sam were born.

Verena returned each holiday to gather facts and ideas, to research local landmarks and landscapes featured in her story. Wherever she went, people were interested in helping her to spin her yarn. When trying to find a way to visit the Goodwin Sands herself, she ran into the head of Dover Coastguard. He allowed her to spend a day with Coastguard officers watching them guide the ships in the English Channel and learning about rescue procedures.

Finally, she was able to walk on the Goodwin Sands herself and take lots of photos of the seals and see with her own eyes the remains of a shipwreck. What an adventure.

When she gets the chance, Verena is writing, reading or watching a good film.

She lives with her youngest son near the Belgium border so that she can strike out to England whenever the island calls her.

When Sam and Alex partner up for their school project about the notorious Goodwin Sands, they 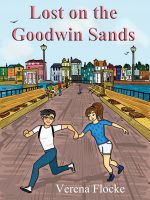 don’t imagine it could turn into a thrilling adventure for them both. They face first love and near death. Will their friends Gemma and Toby be able to rescue them in time? A race for time begins.

Join Sam, Alex, Gemma and Toby as they navigate feelings of curiosity and bravery, guilt and betrayal to learn more about the wonderful forces of love and friendship.

“A spellbinding voice from a wonderful new voice in children’s fiction. Beautiful storytelling.”

Menna van Praag – author of “The Sisters Grimm” and “Men, Money and Chocolate”