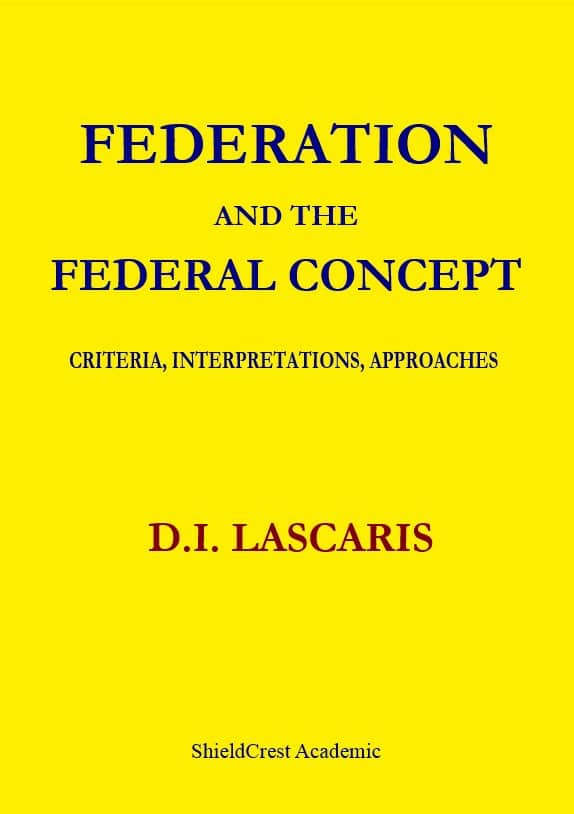 Federation and the Federal Concept by D.I. Lascaris

This book is concerned with a critical revision of federal theory and a redefinition of the concepts of federation and federalism.

The terms federation and federalism are often used in the wider debates on existing federations as well as on several federalization processes around the world, yet in a way that sometimes reveals fundamental misunderstandings and widespread confusion about their actual content. Indeed, the terms federation and federalism should not be used liberally to describe any international integration process any attempt at creating an ever closer union or any attempt at intra-state devolution. Federalism is neither a unionist concept nor a separatist device. On the contrary, federalism bears a very specific and unique meaning, and refers to a very particular form of government and to a strictly limited union that embodies the dogma unity-in-diversity , by institutionalizing diversities and solidifying territorial separation while unifying only those strictly defined sectors and policy areas where common coordinated action at the central level is considered essential by all the participants. The fundamental feature of federation is that the levels of government are strictly and constitutionally independent of each other in their own sphere of jurisdiction and coordinate. No government can be mere implementing body rather than policy-making body. Both levels of government possess exclusive powers.

Making exhaustive use of the international literature in the field, both older and more recent, this book revisits federal theory, defines the notion of the federal standard , analyses the fundamental characteristics of federation , discusses the concept of federalism, distinguishes and classifies the several approaches to federation and federalism that help illuminate the phenomenon from different angles, and examines those aspects that are of crucial importance from the point of view of federal theory.

Although federation is only one among several forms that a union of states or a polity can take, historical experience shows that it can prove particularly appropriate for a heterogeneous and asymmetrical union in its advanced stages, as its peculiar structure and behavioural ethos can contribute greatly to the union s stability and longevity, and can help prevent disillusionments and frictions that could otherwise threaten its cohesion.

Be the first to review “Federation and the Federal Concept by D.I. Lascaris” Cancel reply