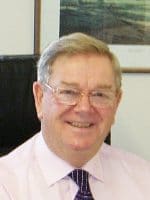 In the 1960’s David was a Transport Pilot in the Royal Air Force, flying all over the world in a Handley Page Hastings four piston-engined aircraft. He gratefully remembers that the RAF paid him to visit 57 countries such as The Congo, Christmas Island, Fiji, Australia and Hawaii. The job included carrying passengers and freight to worldwide destinations, or dropping airborne troops and supplies, with occasional casualty evacuations.

He was given a one-year unaccompanied posting to Aden with the task of scheduling the short and medium transport fleet as an Air Staff Officer. The problem with this type of tour was that on being given the posting, one’s family had to vacate the RAF accommodation within a month and hiring a house in the village proved to be quite expensive. The result was that David had very little money left over for his personal use in Aden. Fortunately, he had taken his trusty portable typewriter with him, and he contacted the editor of the “Dhow” newspaper there to see if he could be given a spare time job writing articles for the paper, which served the families of a very large UK military population out there.

The paper didn’t have a children’s page and Anna Handix, the editor, suggested that he might like to start one. With his extensive aircrew experience he decided to write a series of stories about a boy and his magic aeroplane, named Swifty. He wrote under the pseudonym of “Uncle David” so that no-one knew the identity of the author and during the year he wrote a total of approximately fifty weekly stories which proved very popular with his young readers. For this, he was paid the princely sum of £2 per printed story which at that time was enough to keep him in beer and pipe tobacco!

On leaving the RAF he went into financial services and formed his own company, giving investment and pensions advice. To bolster his confidence, he joined Toastmasters International, which is a public speaking organisation, and later on he became the District Governor for the whole of the British Isles and a world champion speaker.

His hobbies were his membership of the Round Table and teaching youngsters the sport of lawn and indoor bowls. He lectured on weight loss for six years at his local Buckinghamshire Health Centre under the name of Tyrefighters but had to close it down when Covid raised its ugly head. His hobby then became gardening, raising lots of tomatoes and cucumbers in his 6 x 8 greenhouse.

And then a remarkable thing happened in 2022. David’s son Christopher was clearing out the loft in their old house when he found a set of grubby folders with faintly typed sheets of paper inside. He telephoned David to see if the folders could go into the skip and David asked to see them first. They were the original manuscripts for the Aden Swifty stories! On close examination, David realised that with a few changes the stories were just as good as when they were first written all those years ago. He completely re-typed them, and the first set of stories was published in March 2022 under the title “Swifty the Magic Aeroplane” with a second book already well advanced. He enjoyed the exercise so much that a brand new, third book will be ready in time for Christmas 2022. 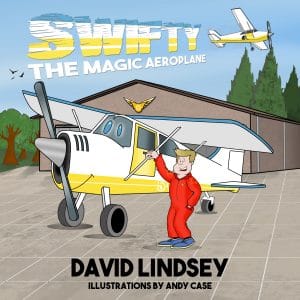 Just suppose you found the wreck of an aeroplane under a tarpaulin in the back corner of an aircraft hangar where your father worked, and just suppose that you heard it crying and asking to be made fit to fly again! When you got over the shock, you then set to, cleaning and restoring it until it looked like new.

To your amazement, it then offered to teach you how to fly!  Just think of all the adventures you could have! That’s exactly what happened to Jimmy Robinson.

This book will tell you all about many of those exciting adventures, and there’s a lot more to come.

Available in both paperback and hardback

Just days after the books’ release, it was featured prominently in the author’s local on-line news journal. 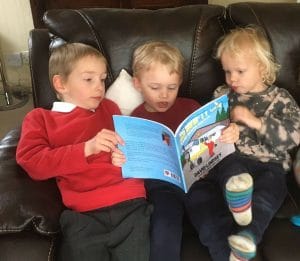 The author’s grandchildren enjoying the book 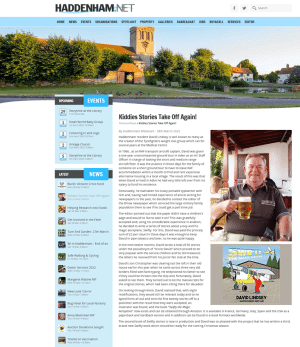 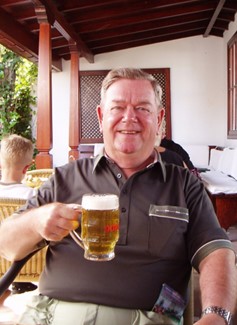 A satisfied David Lindsey while relaxing but don’t be fooled, he’s already planning his next 2 books about further adventures of Swifty the magic aeroplane