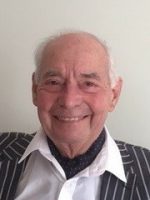 Born in 1938, the son of a miner, Gerald (Gerry) Morris grew up in Wales.  Money was short and life could be tough, but he thrived in the freedom of the beautiful Brecon countryside and nurtured his love of Rugby. Gerry started his National Service at the age of eighteen and was fortunate enough to pursue the game, representing both The Royal Artillery and Kent before being posted to Salisbury.

After discharge Gerry married, became a father of two but still managed to study, graduating in Physical Science from Exeter South Bank and later gaining his masters at The Cambridge Institute.  After entering the teaching profession, Gerry gained a lot of fulfilment from the successes of his young pupils, many of whom he is able to stay in contact with, thanks to modern technology.  Rugby was not to be forgotten and Gerry coached under nineteens for many years.  This led him to becoming the chair of the London Division and the England Panel Member for this age group.  Sadly, his teaching career was cut short due to ill health but he developed a strong interest in collecting antiques.

Gerry’s rationale for writing a novel at, what he refers to as his, advanced age, was complicated. Firstly, to prove to himself he could.  Having long enjoyed writing stories for his children and grandchildren Gerry was keen to write for a more critical audience. However, the content was primarily to put some demons to bed.  Some aspects of the novel are to some extent autobiographical and reflect parts of his life which have left him with feelings of frustration and bitterness.

Gerry believes he has achieved both his aims and hope you enjoy reading this book as much as he has enjoyed writing it. 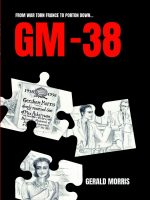 A talented young German Jew became known as GM-38 when she gave up not only her name but her one true love and her only child to join the French Resistance.
She, appalled by the rise of the Nazi Party and the horrors of their regime, courageously  sought to fight for justice and peace. Along with other brave patriots from around Europe she was instrumental in averting  horrendous attack on London, thus saving many lives. The comrades faced peril at every turn and undertook many risky escapades.
The narrative takes you through war torn Europe, Porton Down, Wales and the famous white cliffs of Dover. It tells of successes and failures, gains and losses in the bid to protect the city of London. It also highlights the characters individually, bringing personalities to life. Describing their gallantry despite many fears and uncertainties. Sharing moments of romance and intimacy, of sorrow and heartache but also of laughter and joy despite the perilous times.
A story full of action and intrigue to capture the imagination of every reader.

“At 10.00am on the fourteenth of February 1958 I had reason to feel excited. I was to receive fifty bob (£2.50) and a few days extra leave. All I was asked to do in return was to sit alongside four other National service men for just one hour and fifteen minutes.

The glass panelled door slid open, we all entered the room, totally unexpecting and unprotected as we took our seats around a table. In front of us, behind a thick, sealed partition, were a group of white-coated men. Bloody hell! What have I let myself in to!

Seventy -five minutes later we left the room. Staggering, needing assistance from other white coated men wearing gas masks. It was only then that realisation hit.

We had been sitting in a gas chamber.

This was a day I would remember and regret for the rest of my life.”