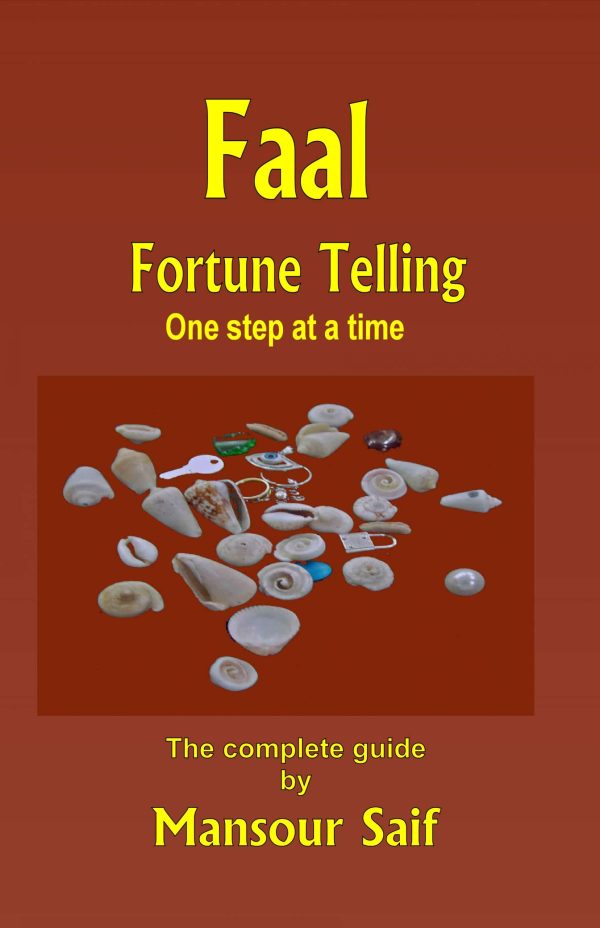 Faal Fortune Telling One Step at a Time by Mansour Saif

Fortune Telling – A way to interpret the Past, Present and predict the Future.

The art of Fortune telling has been practiced among Arab women for the past 5,000 years, from generation to generation.

Now you can easily gain immediate access to the art of how to read fortunes based on objects such as the Amadis shells, the Tiger Cowrie, the Lower part of Tiger Cowrie shell, a small heart shaped object, a small padlock, etc. You will see examples and explanations of objects, which interpret a series of events that will happen to you in the near and distant future.

One school of thought surrounding this ancient art is that the external spirit is transmitted to the faal and that the talented person (fortune teller) following the guidelines outlined within this book can interpret such events. The book will illustrate the direction and the meaning of each object, which will enable you to read the future. You will learn how to decode all the fortune objects and the relevant placement positions. You will be provided with the tools to understand the meaning which, when conveyed to the person you are helping, will hold the keys to the past, present, and future.

All through this book, the author is going to use the traditional Arabic word Foualla instead of the two English words Fortune Teller , and the Arabic word Faal when referring to a collection of objects that enable the procedure for the Foualla to read one s fortune. Faal: Background Information. Every region of the world has its own traditions of telling fortunes. For instance, in Africa, animal or human bones are used by throwing them on the ground. Africa is a vast continent containing many tribes and cultures and there is no one single common technique, for example, not all the bones are actual bones.

Small objects may include cowrie shells, stones, strips of leather, a piece of china, a flat piece of glass, or wood. In most cases, casting or throwing methods is a collection of objects carried out on the ground or on the sand, it is either a repetitive object or a collection of different objects. Each one of the objects symbolises certain actions. For instance, a round stone symbolises a pregnant woman, and a bird foot symbolises holding onto something. From these, it is possible to construct a consistent sequence of events for the client based on the visual relationship between them.

Many people seek out God the regular basis in African society. It is not prohibited to practice against those who tell fortunes. Those who tell fortunes for a living are also sought out for their wisdom as advisers and for their knowledge of herbal medicine. It is possible that the predictions a Foualla tells a client can be a source of amusement and diversion. It can reduce anxiety about an uncertain future as well as reducing the anxiety associated with guessing.

The Chinese Fortune Telling method is quite different from African fortune telling whereby more sophisticated objects are used. Objects such as the shaking of a bamboo cylinder, which results in at least one modified incense stick leaving the cylinder, is an example of such a method. The inscriptions on the stick are analysed by an interpreter. The prediction is short in the range as it covers one Chinese calendar year. In the West, this method has been popularised under the trade-name “Chi-Chi sticks”.

There are numerous methods of using different objects and the way each object is interpreted. In Chinese s society, fortune telling is a respected and essential part of social and business culture. Thus, Foualla can be seen as taking on a role similar to management consultants and psychotherapists. Again Fouallat are not qualified psychotherapist but in this society, they are consulted due to their role as a Foualla. Many major business decisions involve the input of Foualla.