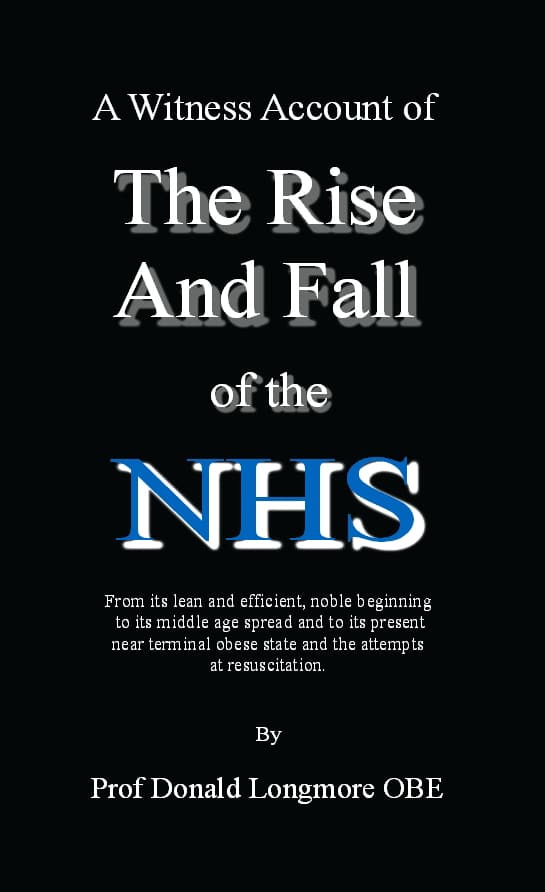 The National Health Service: One of the greatest achievements of the 20th century may soon be no more. Now the NHS is imminently threatened with destruction, it is the responsibility of someone who knows the NHS intimately and cares about it, to diagnose what has gone wrong with it, to tell it how it is and to propose a practical course of action which could save it from destruction by: uninformed political interference; resources being wasted on excessive, damaging and unnecessary bureaucracy; management instead of leadership; and multiple predators who will gain from its demise.

The once-noble organisation, which at first significantly increased our life expectancy by an average of 5.2 years, is now actually responsible in some areas for an increasing death rate and has been reduced to headline scandals and becoming the butt of cartoonists. If the description is a true representation of the rise and fall , has it really fallen? It s not all bad. I hope sincerely, as is most likely, that you the reader are a relatively fit person who will not be ill, break a hip, have a stroke, or become senile. The sad thing is that the NHS may soon be no more. The Prime Minister and the Secretary of State have fought a health bill through Parliament, believing that it will improve the service and reduce the cost. It seemed that those who drafted the Health Bill could not come up with a worse structure but they have.

The NHS is the world s fourth biggest employer with over 1.4 million, employing on the frontline 386,500 nurses (38% foreign, not all trained and speaking English), 109,000 doctors (35% foreign, not all trained and speaking English) and 122,000 scientists, technicians, etc. adding up to 617,500. This leaves 782,500 an excess of 164,500 others. Who are they? Do they contribute to the nation s health? Applying medical diagnostic techniques, distinguishing between diseases you are born with and ones you get, it appears that the problem is the malignant new growth of bureaucrats following many politically-motivated reorganisations. Urgent treatment is required. A doctor treating a patient knows that there are four possible outcomes: the patient can get better, stay the same, get worse, or die. So it is with the effects of the Health Bill.

Each key element is examined to see if it will make the NHS better, stay the same, get worse or be handed over to the predatory private health organisations circling round, ready to pick off the lucrative bits. At stake is the future health of the nation, over 7% of our national wealth and electoral defeat or victory. A likely outcome of the drive to foster competition and license providers is multiple commercial medical contractors taking over the service, overseen ineffectually by an Ofhealth watch, like Ofcom or Ofgen. The NHS was one of the greatest achievements of the 20th century and was envied as the best in the world. It was conceived when Britain, standing alone, was losing a war caused by political ineptitude and pacifists disarming whilst Germany turned itself into a war machine. It started in 1948 and had a Golden Era, despite food rationing, huge debts and the war-damaged infrastructure.

It worked politically expedient where we would like to be initiatives rather than where we could and should be plans. Successive governments have reorganised the service and the result is an unsustainable organisation. The motive may have been to retain control of one of the world s biggest employers, or to sell off the service as franchises to bring in revenue, like the railways.