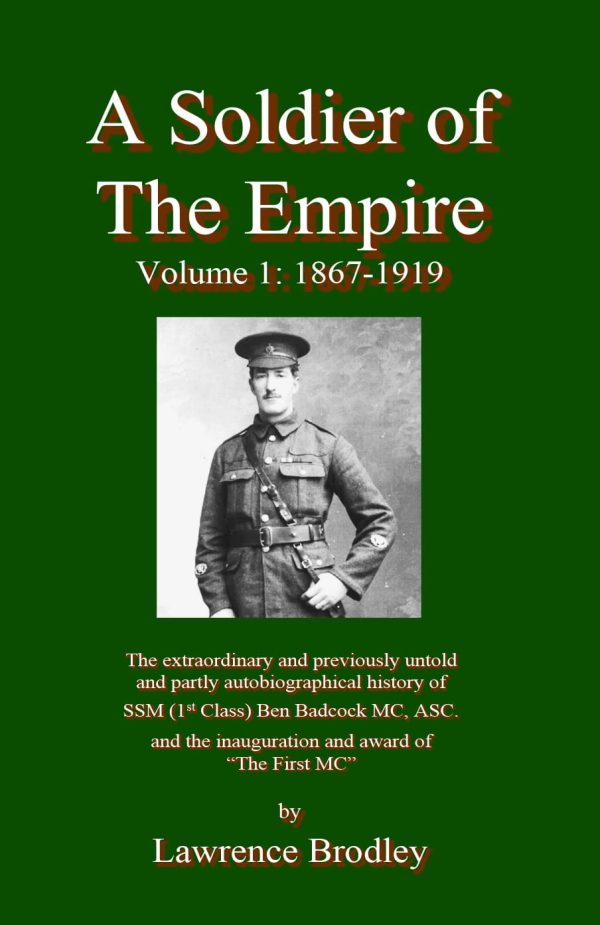 Benjamin William Badcock, my Grandfather, was an ordinary Englishman. Yet like millions of others of his generation, he lived through extra-ordinary times. In 1880, the year of his birth, between twenty five and thirty million people lived in Great Britain, yet its industry and economy dominated the world, and its Queen/Empress, Victoria, held more than a quarter of its 1.5 2 billion population in thrall through her vast navy and tiny army. But the following year, in 1881, a handful of Boer farmers threw down a challenge that reverberated across Africa and the world and set a pattern for the 20th Century that would lead to the dissolution of the old imperial world order, and ultimately to the break-up of the British Empire: all within the lifetime of one soldier, my grandfather, Benjamin William Badcock.

Had you met Ben you would have found him to be, like millions of other British citizens of his time, oblivious of the fact that he was (and they were) making history. But though not a historical figure, he was, nevertheless a participant in, and a witness to, many great events and historical moments, living, as he did, through the greatest period of industrial development and socio-economic change that Britain or the world had ever experienced. Son of a Devonport soldier, his namesake, Benjamin Badcock, Ben was born in a tented Summer camp at Platras on the side of a Cyprus mountain. At three months he was jolted down its mountainside in a donkey pannier as the regimental-train of his father s regiment, the 2nd Battalion, 20th Foot, The East Devons, marched to Larnaca. In the following year, 1881, the family and regiment would move to Malta, and from thence (remustered as Lancashire Fusiliers!) to Ireland in Royal Naval sailing ships.

That voyage, from Malta to Ireland took 3 4 weeks to accomplish, depending on the winds a journey which 70 years later, by the miracle of air travel, would reduce to as many hours as it had taken weeks before: a miracle which by the time of his death in 1964, Ben himself had witnessed evolving from Colonel Sam Cody s tentative stringbag flights at Farnborough in 1910; through the development of aerial-warfare in two world wars, and its metamorphosis into the jet fighters, V bombers and airliners of the 1950 s and 60 s. Much of this he witnessed from his back-garden in Aldershot as the myriad prototypes circled and dived in the then ALL British, Farnborough air shows, held annually each September.

Those changes, however, had been bought at great human cost as a result of clashing imperial egos, and conflicting political and socio-economic imperatives, the price of which is still being paid in continuous political conflict and instability across the globe and in particular in the Middle East: conflict in which British armed forces have been constantly and tirelessly involved, both at home in Ireland, and overseas. And it was in these conflicts, in one way or another, that the Badcock family were involved from 1867 to 1969: the zenith of which service culminated in the award to my grandfather, Benjamin William Badcock (later Baddock) of the Military Cross (MC), The Medaille Militaire, and his three Mentions in Despatches during WW 1; the Great War; or Big Scrap as Ben called it. But to talk of that gets ahead of ourselves, for prior to that my Grandfather would first have to be raised; to take the “Queen’s shilling;” be trained and blooded for the task in the 2nd Boer War; and to meet and marry Mabel Lawrence, and with her, to raise a family of their own.

And that is a story in its own right.